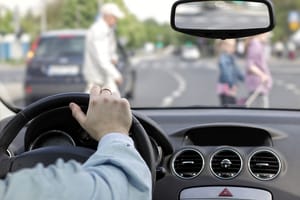 People Injured while walking in the street depend on this Miami Pedestrian Accident Lawyer for assistance. A pedestrian is somebody who is on foot, on either a public or private roadway. While walking can be good exercise, it can also be quite dangerous – especially in Florida where drivers are not always the best.

Pedestrian crashes are caused by all sorts of different factors. For example, oftentimes a pedestrian wreck can be caused by lack of lighting or poor/inadequate lighting. Drivers on dimly-lit streets might not be able to see people walking near the roadway. As a result, these pedestrians can easily be hit.

If you’ve been hit by a car due to inadequate lighting on a roadway, your case would be referred to as a roadway construction case. The case would be against either the owner of the roadway or the company that either designed or installed the lighting.

Roadway lighting may also be the responsibility of the governmental entity that owned the road. For example, the owner of a roadway is supposed to check periodically to make sure that the lighting on its roadways is working and adequate. If it doesn’t do this, then it will be liable.

The governmental entity may hire a contractor to work on the lighting. In that case, the contractor will be responsible for any lighting problems. However, the governmental entity itself will always be liable as keeping its premises safe is said to be a “non-delegable duty” – meaning the owner of a property cannot delegate or contract-away its duty to keep its property safe. If the property isn’t safe and somebody is injured as a result, then the owner of the property will be responsible even if it hired a contractor to do the work.

Texting and driving also frequently causes pedestrian collisions. This may easily occur when a driver looks down at his or her phone and away from the road. That driver may then easily drive off of the roadway and strike a pedestrian on the sidewalk or swale.

Should you or a loved one be hit as a pedestrian, contact this Miami Pedestrian Accident Law Firm. Mr. Quackenbush handles cases all over Florida (including Palm Beach County, West Palm Beach, Fort Lauderdale and Broward County). Call Mr. Quackenbush at 954-448-7288 to discuss your case at no charge.

Frequently, pedestrians are victims of hit-and-run accidents. Passing vehicles will hit pedestrians and flee the scene for whatever reason (e.g., because the drivers don’t have licenses, because they don’t have insurance, because they have warrants out for their arrest, because they are drunk/intoxicated/impaired, etc.). If this occurs to you, it is obviously critically important to determine the identity of the driver. This is because you may be able to recover compensation either from the driver him or herself or from his/her insurance company.

One way that you may be able to determine the identity of the hit-and-run driver is through the use of red-light cameras. If your accident was at an intersection, then you may be able to retrieve the video footage from the intersection. That footage could possibly reveal the identity of the other driver (e.g., his or her license plate may be visible on the video, etc.).

However, if you are going to attempt to retrieve red-light cameras, you should do so as quickly as possible. This is because many of these video cameras tape on “loops.” This means that the videos will tape over itself every so often (it could be every day, every three days, every thirty days, etc.). If you don’t obtain the footage before the video tapes over itself, it could be lost forever.

Even if there were no red-light cameras in the area, there may have been neighboring businesses (gas stations, convenience stores, fast-food restaurants, etc.) that might have had surveillance videos that captured the accident. Mr. Quackenbush will attempt to retrieve this footage directly from the businesses themselves. In doing so, many times he will find witnesses who saw your collision or heard something about it which might be useful to your case.

If you were hit as a pedestrian in the State of Florida, you may be entitled to “personal injury protection” (“PIP”) benefits. P.I.P. from your automobile insurance will pay for up to $10,000 of your medical bills or lost wages/time missed at work.

Pedestrians injured in collisions frequently experience catastrophic injuries. This is because they don’t have the benefit of vehicles protecting them. As such, pedestrians may incur any of the following injuries: