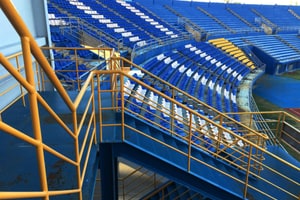 If you’ve been injured in a public place, contact this Fort Lauderdale Stadium and Theatre Accident Attorney. Unfortunately, accidents happen in stadiums and theatres every day. This is because such places are so busy and often crowded. People leave things on the floor, knock each-other over, etc. If you’ve been injured in a stadium or theatre, you might be able to pursue a case.

If you’ve been hurt in a public place, call Mr. Quackenbush at 954-448-7288. This Fort Lauderdale Stadium and Theatre Accident Law Firm can help to get you the compensation you deserve. Call him today for a free, no obligation consultation.

Other attendees to a sporting event or show may also cause you injuries. For example, you may be pushed over, shoved, tripped or otherwise injured accidentally. In this case, you may be able to pursue a case directly against the person who caused your injuries. Additionally, if the tenant (i.e., the athletic/sporting team or band) may be responsible if it somehow allowed the accident. For example, if large groups/masses of people were allowed to congregate and not properly directed to their seats, then the sporting/athletic team or band could be responsible if you are hurt in the bustle.

Other attendees may also intentionally injure you (i.e., commit assault and battery). In this case, the athletic/sporting team or band will not typically be liable – unless it somehow allowed the crime to occur. This can happen, for example, if the criminal was served too much alcohol at the event or if the athletic/sporting or band didn’t provide enough security to deter crime (this would be called a negligent security case). Negligent security cases can result from incidents occurring in parking lots and garages, as well as in the actual stadium or theatre.

Occasionally, stadium and theatre attendees are injured by an activity involved in the actual event. For example, baseballs at a baseball game may fly into the crowd and injure attendees. If the baseball team and stadium don’t take proper precautions to prevent this, then they may be responsible.

To Discuss Your Case for Free, Contact this South Florida Ditch and Pothole Accident Attorney/Lawyer Today