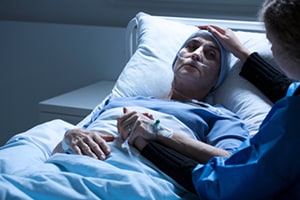 Cancer patients who have been harmed by a doctor or hospital should turn to this Fort Lauderdale Oncology Malpractice lawyer. There are various types of oncology negligence, but the typical case occurs when an oncologist (a doctor who treats cancer patients) fails to diagnose the cancer or diagnoses it as something else. When this happens, the patient may go a long time without knowing that he or she has cancer. This can be disastrous because cancer typically spreads and moves to other parts of the body. Not treating cancer quickly at the beginning can allow the cancer to spread, and every day counts.

Studies show that the early detection of cancer can make it much more treatable. After all, not diagnosing the cancer can cause it to grow or metastasize (a process wherein the cancer goes from a local process to a disease that spreads to other parts of the body). If this is the fault of a doctor or hospital, you may have a medical malpractice case.

If you or a loved one have been affected by oncology malpractice anywhere in Florida (including Miami-Dade, Miami, West Palm Beach, and Palm Beach County), contact Mr. Quackenbush at 954-448-7288. This Fort Lauderdale Oncology Malpractice Law Firm can help you during your difficult times. Contact Mr. Quackenbush to discuss your case – you will not be charged for that call.

One of the chief defenses in such a case will be that, even if your cancer had been diagnosed earlier, there is nothing that could have been done about it. That is, the defense in your case will likely argue that your cancer was going to progress even if it had been diagnosed earlier. Sometimes this is true, and sometimes it isn’t. Usually this depends on the type of cancer that you have. Some cancers are treatable, and some aren’t. If you have a form of cancer that is usually treatable if detected early enough and you lost out on this opportunity because your oncologist failed to diagnose the cancer, then you may have a medical malpractice case. On the other hand, if you have a form of cancer that isn’t easily treatable, then such a case may be tougher.

Likewise, the length of the delay is something highly relevant in a failure to diagnose cancer/delayed cancer diagnosis/cancer misdiagnosis case. That is, if the time between the misdiagnosis and the eventual correct diagnosis was long, then it may be easy for you to argue that your situation after the diagnosis was much worse than it would have been if there had been an earlier diagnosis (i.e., you would have been more treatable). On the other hand, if there wasn’t much time between the misdiagnosis and the eventual correct diagnosis, then it will be harder for you to argue that you are in a worse position. The exception to this will be if you have an extremely fast-spreading type of cancer. If you have a faster-spreading form of cancer, then even a short delay can make a big difference.

Information Given by this Broward County Oncology Negligence Attorney/Lawyer

Types of cancer that are frequently misdiagnosed include:

Cancer misdiagnoses can occur when an oncologist misreads an x-ray, MRI, CT scan, mammogram, or biopsy. They can also occur when a patient presents with symptoms of cancer, but the doctor fails to order the appropriate test.

Unfortunately, many cases of cancer result in death. If your loved one passed away as a result of cancer allowed to progress due to the negligence of an oncologist or hospital, you may be able to pursue a wrongful death medical malpractice case on your loved one’s behalf. In that case, somebody will be appointed as the personal representative (“PR”) of your loved one’s estate, and that person will act as the “Plaintiff” or person bringing the lawsuit. When the case settles, money from the case will go to your loved one’s survivors (or the “beneficiaries of the estate”).