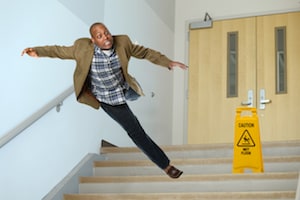 If you’ve been injured during a fall, call this Fort Lauderdale Faulty Handrails and Stairwells Accident Lawyer at 954-448-7288. Falls can occur for any number reasons. One place many falls occur is in stairwells of apartment complexes, condominiums, hotels, motels, resorts and business establishments. One reason a fall can occur in a stairwell is as the result of a faulty handrail or the lack of a handrail. A person may attempt to grab a handrail in a stairwell, only to fall when the handrail either breaks/malfunctions or there is no handrail.

Call Mr. Quackenbush if you’ve been hurt due a fall in a stairwell, staircase or on steps anywhere in Florida (including Miami, Miami-Dade County, Palm Beach County, and West Palm Beach). This Fort Lauderdale Faulty Handrails and Stairwells Accident Law Firm can be contacted at 954-448-7288. Mr. Quackenbush will discuss with you all aspects of your case for free.

However, you may also have a case against the tenant (for example, a business owner) if it can be shown that it was actually the tenant that had the responsibility for making such repairs. You may be able to show this using the lease documents between the landlord-tenant.

If you’ve fallen due a faulty handrail or the lack of a handrail in a stairwell, staircase or on steps, you should attempt to retrieve video surveillance of the incident. Stairwells frequently have surveillance cameras for security reasons. Therefore, your fall may have been captured on this footage.

If you hire Mr. Quackenbush as your attorney, he will likely send a “preservation letter” to the place where you fell. This preservation letter instructs that entity to “preserve” and not get rid of or alter the surveillance tape. If that entity does so, there can be drastic consequences in court.

Frequently, the lack of a handrail can contribute to the fall of a person who is already in the process of falling. That is, a person who loses his or her balance may reach for a handrail only to realize that there is none – and the fall can occur as a result. In this case, the defense may argue that the fall was actually your fault. After all, if you weren’t falling to begin with, the handrail would have been irrelevant.

This is referred to as a “comparative negligence” argument. The defense will argue that you are comparatively negligent, meaning at least in part at fault yourself. If your case goes to court, the jury will be asked to divide up percentages of fault (i.e., 50/50, 90/10, etc.). Whatever amount of money you are awarded by the jury will be reduced by your comparative fault. For example, if the jury awards you $100,000 but thinks you were 10 percent at fault yourself, you will receive only $90,000 (rather than the full $100,000).