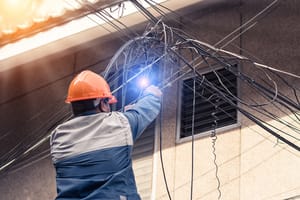 If you’ve been injured due to electric shock, contact this Fort Lauderdale Electrocution Lawyer today. Electric shock is defined as electric current passing through the body. It can be caused when a person touches an electrically charged object.

Additionally, electrocution/electric shock can cause neurological problems and vision problems as well.

If the electrocution/electric shock is bad enough, it can even cause death. Frequently, this occurs when the electrocution affects the heart and causes cardiac arrest. If your loved one has passed away as a result of electrocution or electric shock, an estate will need to be set-up on his/her behalf. A relative or family member will be appointed as the “personal representative of the estate” (“PR”). This person will act as the person bringing the lawsuit. Any compensation received from the case will go to your loved one’s survivors. These people may be referred to as the “beneficiaries of the estate.”

Contact Mr. Quackenbush if you’ve been hurt due to electric shock anyplace in Florida (including Palm Beach County, West Palm Beach, Miami-Dade County and Miami). This Fort Lauderdale Electrocution Lawyer can be reached at 954-448-7288. At no charge, he will discuss all aspects of your case with you.

There are restrictions on who can be a beneficiary of the estate, so it is best to call Mr. Quackenbush to figure this out.

If you were electrocuted by a product (such as an electric tool), then you may have a products liability case against the manufacturer of the product.

The statute of limitations for a premises liability case in the State of Florida is four-years. This means that, if you or a loved one is hurt due to electrocution/electric shock, you have four-years from the date of the incident to file a lawsuit. If you don’t do this within the four years, your case will be forever time-barred.

One frequent type of electrocution case results when a victim is electrocuted after touching a “live” electrical wire. If FPL (Florida Power and Light) installed the live wire or failed to fix it and you were injured as a result, then you may have a case against Florida Power & Light. For example, you may have been hurt while working on a tree that was touching a live wire. Electric current can potentially reach and injure you that way.

Many workers are electrocuted while on the job. This may be the result of the worker touching a high voltage line, touching power lines, underground or overhead wires, etc.

On the other hand, if you were injured on the job due to your employer’s simple negligence or if it was just a complete accident (i.e., nobody’s fault), then you will be stuck pursuing a worker’s compensation case for your medical bills and lost wages/time missed at work. However, you can still pursue a personal injury case if you’re able to find some other third party at-fault for the accident. For example, if some other outside company installed some wiring at your place of work and you were electrocuted as a result of that wiring, then you may be able to pursue a case against that outside company.