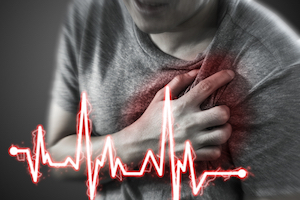 People with serious medical problems turn to this Fort Lauderdale Cardiac/Heart Attack/Myocardial Infrarction/Failure to Diagnose Arrhythmia Lawyer. A myocardial infrarction is typically referred to as a “heart attack.” It results when blood flow slows down or stops going to a certain part of the heart. This can cause serious damage to the heart itself. As a result, the person experiencing the heart attack may feel pain and discomfort into the:

In addition, people experiencing a heart attack may feel the following symptoms:

A heart attack may result in cardiac arrest, which is a lack of blood flow to the rest of the body. Cardiac arrest can be fatal.

Medical malpractice results when a patient is experiencing the symptoms of a heart attack, but the heart attack is not diagnosed. This is referred to as a case of misdiagnosis or delayed diagnosis.

If you’ve experienced a serious health issue anywhere in Florida (including Palm Beach County, West Palm Beach, Miami and Miami-Dade County), contact Mr. Quackenbush today. He can be reached at 954-448-7288 and will talk to you about your case for free. This Fort Lauderdale Cardiac, Heart Attack, Myocardial Infrarction, Failure to Diagnose Arrhythmia Law Firm can help you in your most trying times.

On the other hand, your doctor may also be liable if he or she orders the correct test but misreads it. This would be referred to as a case of failure to diagnosis. For example, if the doctor orders an ECG which shows that you are having a heart attack but your doctor misreads the ECG and determines that you aren’t having a heart attack (and discharges you instead of prescribing treatment), then the doctor may be liable for whatever damages result.

Finally, your doctor may diagnose you with a condition other than a heart attack. This would be known as a case of misdiagnosis. If this occurs, you receive the wrong treatment as a result, and catastrophic results ensue, then your doctor might be liable.

Myocardial infrarction can be treated in several ways. Possible treatments include:

Nevertheless, when you’re having a heart attack, immediate treatment is urgent. That is why, if your doctor makes a mistake and delays treatment for whatever reason, he or she can be liable.

Arrhythmia is defined as an irregular heartbeat. This can include a heart rate that is too high (tachycardia) or too low (bradycardia). Arrhythmia can include the following symptoms:

Arrhythmia can be treated in several ways. These include:

An arrhythmia has the potential to lead to a heart attack. As such, it is important for doctors to diagnose it correctly. If a doctor doesn’t do this and you end up experiencing a heart attack as a result, the doctor may be liable for your damages.

Unfortunately, heart attacks kill many people. If you’ve lost a loved one due to a failure to diagnose on the part of a doctor, you may be able to pursue a medical malpractice wrongful death case against the doctor. In this situation, a personal representative (“PR”) will have to be appointed on your loved one’s behalf. Proceeds from the case will go to your loved one’s survivors (i.e., the beneficiaries of the estate).

However, you should be aware that such cases have a two-year statute of limitations. This means that you only have two years to bring a case. Additionally, there are many restrictions on who (i.e., which family members) can benefit from such a case – so contact Mr. Quackenbush today.