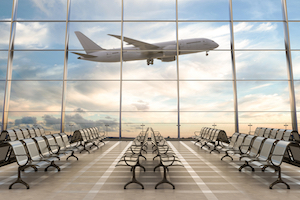 If you’ve been injured while traveling, call this Fort Lauderdale Airport Accident Lawyer today. Although necessary to transport people around the Country and World, airports can also be dangerous places. This is caused in part because of the enormous numbers of people who travel in airports. Each day, large amounts of people travel through the State’s airports to get where they are going. In this situation, accidents are inevitable.

Accidents also because more likely because of the quick pace that people move through airports. For example, people may be late for their flights and may run through terminals in order to get where they’re going on time. Again, this can increase the chance of an accident. The person who is hurrying through the airport in order to get to his or her flight can fall him or herself. Additionally, that person may bump into or knock other people over, causing injuries.

Slip and fall/tip & fall accidents also frequently occur in airports. This can happen when liquids (e.g., soda, water or juice) or objects are left on the ground/floor of airports.

Contact Mr. Quackenbush if you’ve been hurt in an airport located anywhere in Florida (including Miami, Miami-Dade County, West Palm Beach and Palm Beach County). You can achieve compensation alongside this Fort Lauderdale Airport Accident Law Firm. He will give you a free consultation if you call 954-448-7288.

If you’ve been involved in an airport accident, one of the most important things to know will be exactly where the accident happened. For example, if the accident occurred in a “common area” in the airport, then your case should be against the airport itself. However, most airports are owned by governmental entities (i.e., counties, cities or the State). As such, if your case is against a governmental entity, the case will be one of “sovereign immunity.” Sovereign immunity cases have certain restrictions and limitations. For example, a person suing a governmental entity in a sovereign immunity case will typically only be able to recover up to $200,000 in compensation. The only exception to this will be if legislation in Tallahassee (referred to as a “claims bill”) is passed to allow a larger recovery. However, this is difficult.

There are also time limitations on when such a suit can be filed, so it is important to call Mr. Quackenbush as soon as possible.

If your accident happened in a private business establishment in the airport, however, then you may be able to pursue a case against that entity – and then you won’t have to deal with the restrictions above.

For example, if you were injured in a store, restaurant or bar in the airport, you may be able to bring a case against that business establishment (and possibly also the airport as well).

One thing you should determine if you’ve been hurt in an airport is if your accident was captured on surveillance. There is typically surveillance cameras throughout airports. However, such surveillance tapes are typically on “loops.” This means that the tapes typically tape over themselves – for example, every 3, 10 or 30 days. It is thus urgent that you get the tape as soon as possible – so that it isn’t lost forever. If you hire Mr. Quackenbush, then he will likely attempt to get the surveillance tape ASAP. He will also likely send a “preservation letter” to the airport or business establishment where you were hurt instructing that the video be preserved and not disposed of or changed. If this isn’t done, then the airport or business establishment can be sanctioned in court.